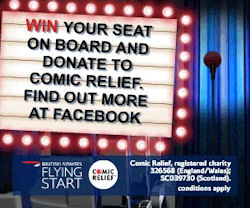 Can you believe it’s almost time for Comic Relief ‘s Red Nose Day again? I actually remember wearing a red nose on the first ever Comic Red Nose Day in…er…1988 I think! (Yes, I know that dates me a little, but I was still at school, honest!)

This year, Dara O’Briain, Jack Whitehall and Jon Richardson will be teaming up with BA and Guinness World Records to set the record for the ‘Highest Stand-Up Comedy Gig in the World’. 35000 feet high to be precise!

You could be one of the 75 people at the gig as it flies over the UK on 12th March (including champagne and refreshments, naturally!) if you text ‘Fly1’ to 70300 or visit www.facebook.com/britishairways?sk=app_177389158973234 to enter the competition.

Comic Relief supports projects in the UK, Africa, Asia and Latin America which help children who lead tough lives. With Flying Start, Comic Relief and British Airways are working together in a year-round fundraising partnership which will change lives both here in the UK and in some of the poorest countries in the world.

Flying Start is working on raising up to £6 million by 2013 to improve the lives of hundreds of thousands of children by giving them a chance to enjoy their childhood. That could be by giving them a break from caring for sick family members, supporting their education or helping children living on city streets to break free from poverty.

Here’s Jack Whitehall talking a bit more about the gig…

So don’t miss your chance to be part of the Highest Stand-Up Comedy Gig in the World – text ‘Fly1‘ to 70300 or visit www.facebook.com/britishairways now!